We recently launched a new experience in Small Improvements – 1:1 Meetings. While building this new feature was fun, it also presented us with a number of challenges. In this post, I’ll outline how we worked with customers and HR thought leaders, the lessons learned and additional insights into how we develop at Small Improvements. Hope you enjoy it!

In 2015 we took a company trip to San Francisco. Our biggest takeaway from meeting with lots of customers was that they were using 1:1 Meetings for ongoing feedback and relationship building. Small Improvements already had a basic note-taking functionality, and ourselves understood the value of regular 1:1 Meetings, but in our conversations in SFO, we realized there was a need for a stronger tool. Our goal: to offer users a way to record those ongoing conversations between a manager and their team members. Regular 1:1s form a solid base of any healthy feedback culture and allow managers to learn about issues early on, while also engaging in personal and professional development. Knowing that our customers shared our belief system on this feedback aspect only empowered us to move forward with developing the 1:1 Meeting tool in Small Improvements.

Setting sail for the “Year of the Manager”

Our San Francisco jaunt inspired our CEO Per Fragemann to term 2016 as the “Year of the manager.” The whole company would work towards making our tool more fitting and supportive for managers. This included multiple ambitious projects such as an Activity Stream, a new Navigation, and Slack/HipChat integrations, to name a few. It was at that time that I proposed a project to embark on a ‘fact-finding’ mission to obtain a clearer picture of how our customers ran their 1:1 meetings. We envisioned a solution that would facilitate capturing those 1:1 Meetings, which were already taking place, within Small Improvements. Those conversations would be fundamental to more longer-term feedback and as a focal point for personal and professional development. We saw it as a benefit for users to record those conversations in Small Improvements – the very place where more formal, future-oriented forms of feedback is given and received. 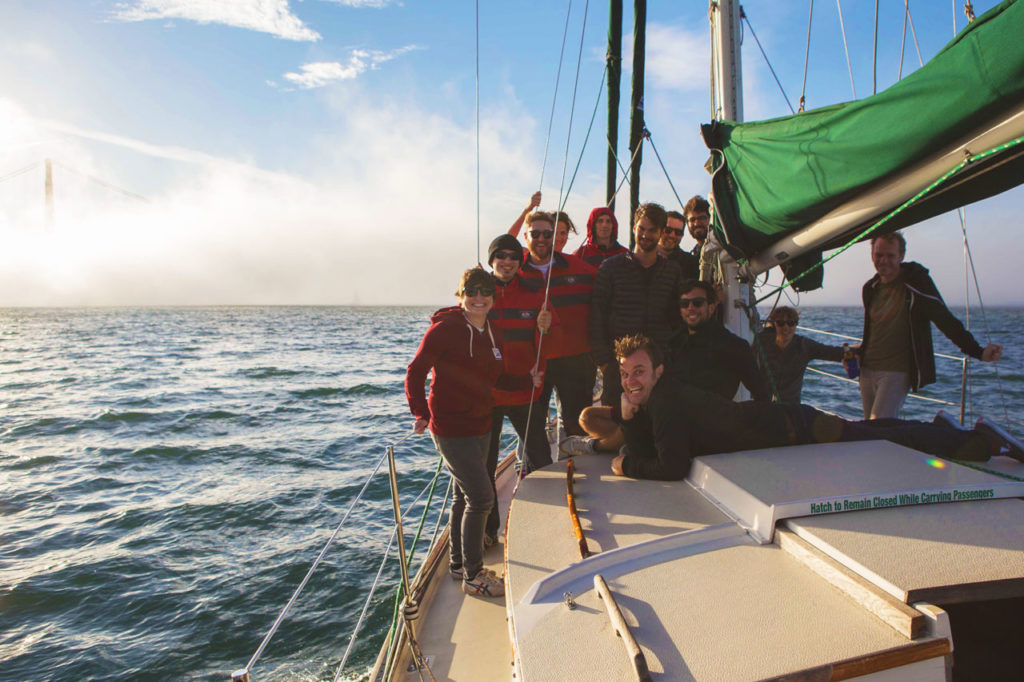 (Most of) The Small Improvements team in San Francisco

Embarking on the “Fact Finding” mission

In May 2016 I flew out again to San Francisco to join Scott Faverty from our Customer Team and interview over 20 customers. The conversations happened on-site or remotely via video conference. Prior to the trip we collected our requirements and paid close attention to conversations with our customers. That way we had an initial baseline to form our hypothesis. We developed a questionnaire to run comparable interviews and test our hypothesis. Thanks to our amazing customers, we gained a great deal of insights and could adjust and confirm our initial hypothesis. This allowed me to come back to Berlin with a bag full of new ideas, thoughts, and contacts for an Early Adopters Program.

A few weeks after the customer discovery phase, Scott flew over to Berlin and we initiated a two-day hackathon with our designer Lucas to forge some of the first UI mocks. We wanted to visualize the basic requirements and take a first glance at an MVP. We presented these outcomes internally at one of our regular All-Hands meetings to solicit feedback promote a broader discussion. For our team, it was a great first indicator of how the software would look like.

The most valuable learning was that although our initial drafts were supporting lot’s of requirements, they were too complex and heavy. Using that feedback we were able to streamline the scope and carve out the most important pieces. 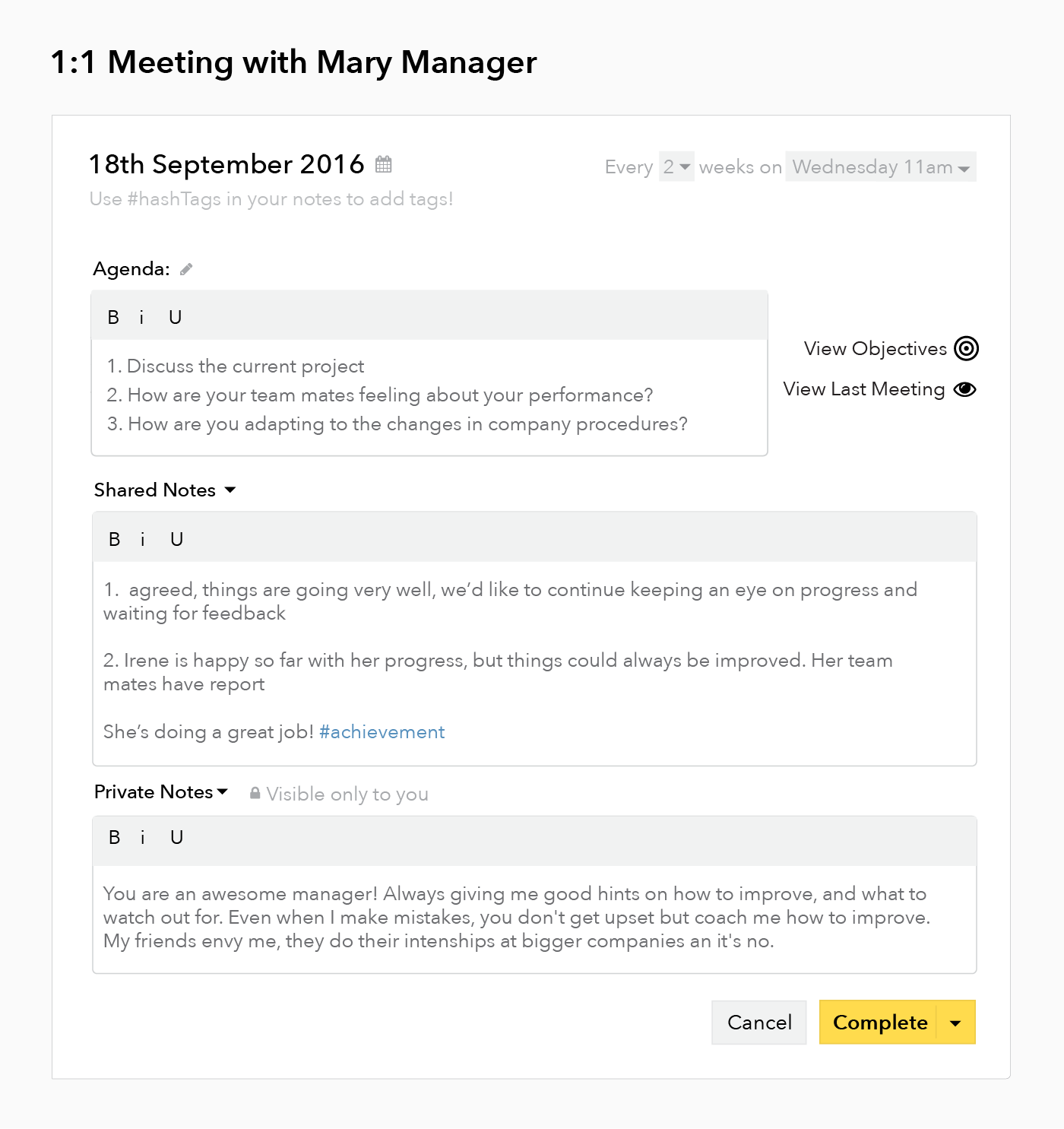 Starting the wheel of iterations

Previously at Small Improvements, we divided up our developers into three cross-functional teams. I was heading up Team Green, which at the time was already immersed in another large project – the internal Activity Stream. After it’s release in September we then had the time to start developing our 1:1 meeting software. In Team Green we have an agile workflow interspersed with small sprints, i.e. ‘iterations’.

A typical feature iteration starts with a planning and estimation phase, where we align on the tasks for the following week. A new feature is usually discussed in broader context with a kick-off meeting. That meeting involves Product Management and all the relevant stakeholders (such as Marketing, etc.) and results in a clear overview of the scope of the feature.

For the actual implementation, we develop UI-first, meaning we started with a detailed specification document that included user-stories and polished design mocks. Based on those requirements we were able to break down the work clearly into packages and then start coding.

We wanted to finish a first version before our company trip to San Francisco at the end of September, in order to demo it to customers and get initial feedback.

After a few intense weeks, we flew back to San Francisco with a first working version of 1:1 Meetings. The most interesting learning was that with the tangible prototype, we had a great baseline for discussion and getting feedback. This showed us areas where we were on the right course and what was not clear or needed improvement. It may sound obvious now, but we were surprised to learn that when we forced ourselves to show our “baby” in an early, unfinished, state we were not so emotionally attached to it and therefore able to get much clearer feedback. 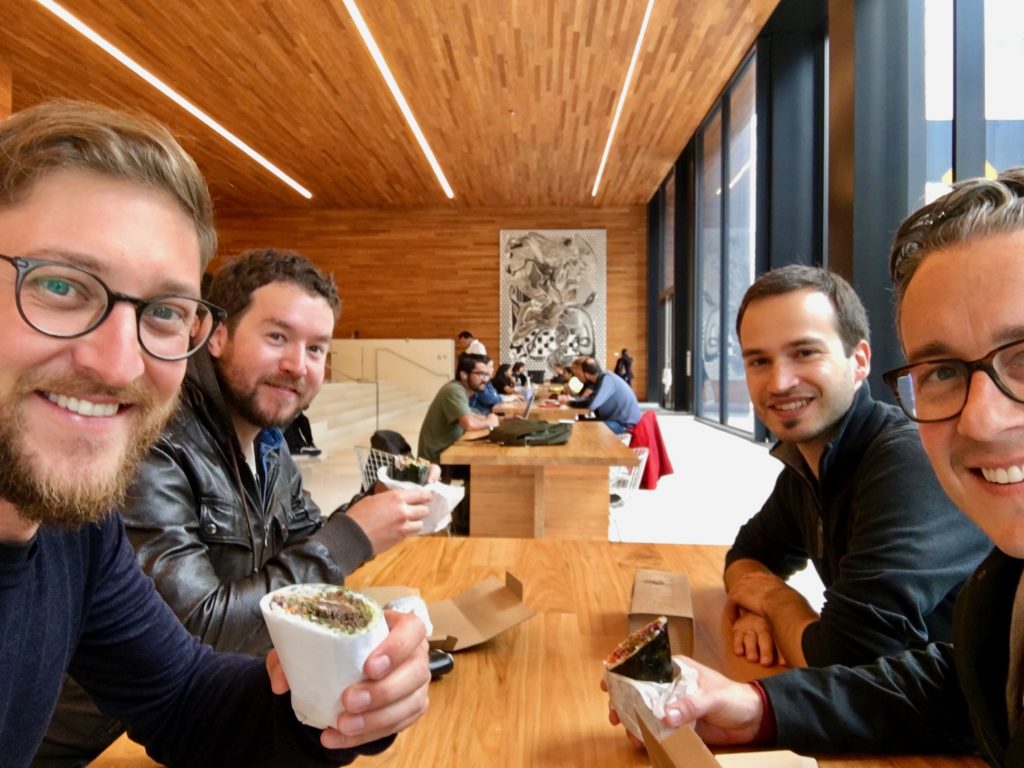 Getting it out to customers – the Alpha phase

Back from SFO, we could focus on refining our early prototype. We set out to deliver an early Alpha version to a select group of customers. The challenge: it needed to be simple enough for our testers to provide feedback!

After a few weeks, we reached a point where we could invite the first pilot customers and give them access to the software. Our plan for soliciting feedback had worked, in fact, we were getting emails every day with praise and suggestions for how we could improve the feature. We used that feedback as a blueprint for what customers actually wanted to see with the tool. Having a narrow focus was motivating because we were building a feature that was aligned with our user’s needs. We found ourselves in a near-perfect workflow, a blissful feeling to feel passionate and driven by what you’re working on.

Working in that state, we were rapidly approaching the next milestone … the public Beta Phase.

Refining and perfecting – the Beta phase

During the beta phase, it was even more critical for us to get feedback. We wanted to identify the important missing parts for the 1.0 release. So we added a Company Dashboard, which allows HR admins to see if 1:1s are happening on a regular basis. The feedback we received from the beta users was simply invaluable; it helped us not only refine 1.0 but also versions for down the road.

On April 18, 2017, only seven months after the initial kick-off meeting we proudly released 1:1 Meetings for Small Improvements. Of course, we celebrated this with a fabulous dinner with the whole team. What’s exciting is to see how well the feature is received by our users. Just 10 weeks later we’ve seen over 20,000 meetings created, close to 50,000 Talking Points and 1.9 million (!!) words written in 1:1 Meeting Notes. 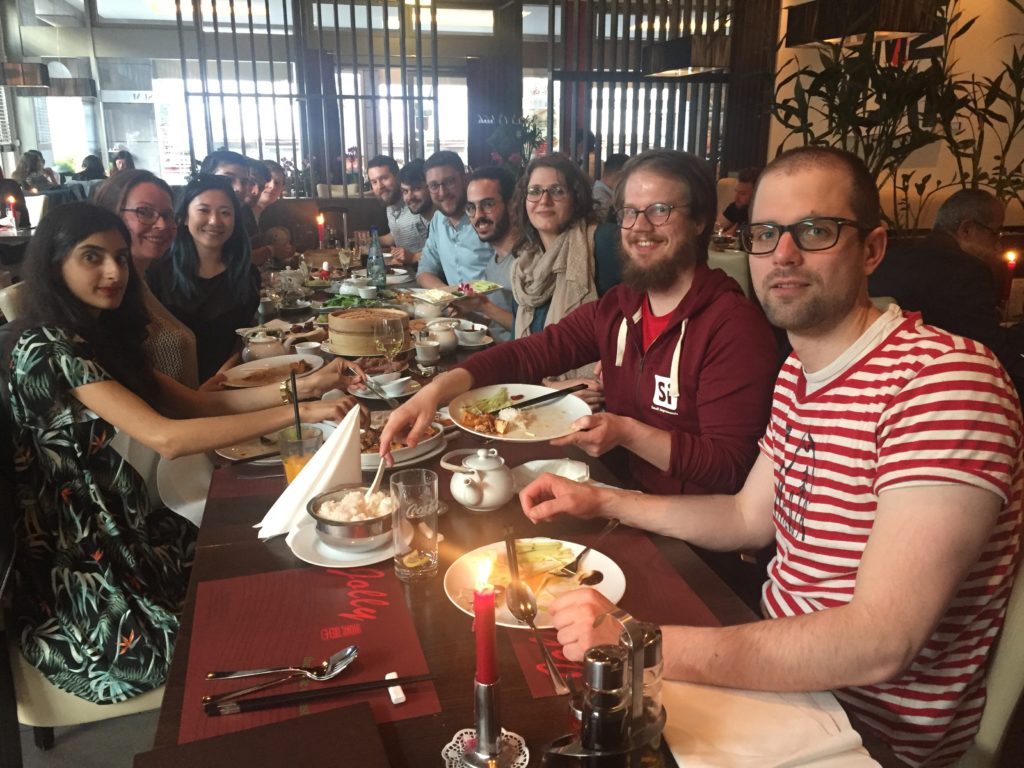 Celebrating the release of 1:1 Meeting Notes 1.0!

The first release is, of course, just the beginning. We’re already tackling the backlog of ideas on how we’re going to improve the feature. We’re aiming for small, maximum-value additions staggered consistently over time. So stay tuned and if you have questions or feedback don’t be shy and reach out! 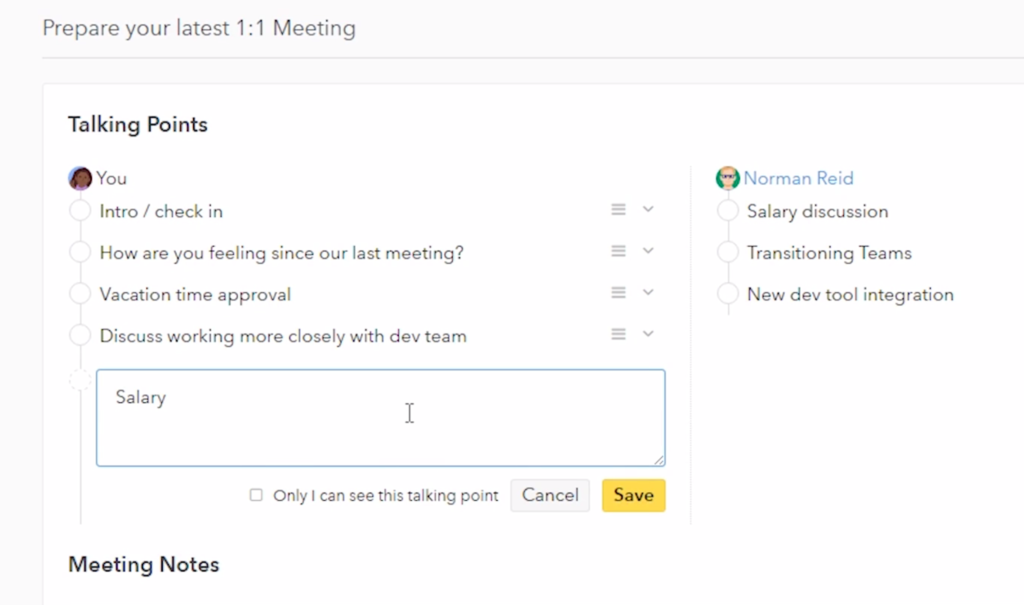 And a big thanks…

To our awesome customers, giving us so many insights and not being shy to experiment with early releases. Thanks for the time and for the honest feedback!